Tiger tourism was started so as the forest department can earn revenue after ban on wildlife game licenses in India. One of the biggest advantages here was that without disturbing the wild animals and their population we not only earn revenue but also generate awareness amongst visitors and till date it has proved right on both points. Another advantage had been revenue generation amongst local people by way of activities and employment.
﻿
﻿If tiger tourism is stopped poachers will be at an advantage since our forest department is not having enough staff to protect the reserves. With tourists taking a round inside the park they also act as patrols to keep a check on movement inside the park and we do not need lot of people to keep a watch on them since the guides accompanying each vehicle is responsible to handle the tourists and normally the vehicle drivers are also vigilant enough. A very good example is from Kanha where some tourists had seen a tiger with iron clamp (certainly put up by poachers and not tourists) stuck on its feet and this was immediately bought to notice of the department which by taking timely action could save the beautiful animal and he survived for next couple of years.


Inviolate doesn’t mean that visiting the area is forbidden but that all human settlements from the area should be removed. An excursion by tourists is for limited time and in certain areas only within the designated tourism zone of the core area of any tiger reserve. Here the forest department has its patrolling parties which keep a watch on tourist activities and take action against the guide and vehicle drivers as and when required if they fail in doing their duty as laid down by the department.

I believe, in places like Kanha and Bandhavgarh tourism infrastructure has grown beyond the stipulated capacity of the park and needs to be checked urgently. Certainly tourism needs to be controlled / regulated but banning it will be bad to the point of no return and we will lose most of our tigers soon. A few questions we need to ponder upon: Why we have good tiger population in tiger reserves with good tourist inflow and not in once with lack of tourism infrastructure? How do we propose to help local population in income generation once they lose their employment? What is Inviolate here?

In a recent article I read in a very prestigious magazine I was shocked to know that the field directors think that radio collar being put on wild tigers to check their movement is a problem and reason behind the unsuccessful mating. Now I am bit bewildered by this statement since it is well known that Tigers at Panna and even Kanha were radio collared and they mated and had cubs. So, why this move to stop radio collaring?

My idea, at this point may be farfetched but, I do feel that all this is being done under a strategy where tourists are being kept away from the forest, thereby local people losing their income and soon all ask to bring in industries and other so called developmental activities to the area. Since all our tiger reserves are source of natural resources and putting any industry in the vicinity is not possible due to regulations best remove the biggest obstacle – Tiger. Panna and Sariska are biggest examples where mining industry is facing problems due to Tiger reserve status.
﻿
﻿

Once Tiger tourism is stopped the forest department will be free to give any report of its liking and we will have to believe it since no one is going in and keeping a check on the activities. No one knows if we have tigers left or not. No one falls in love with our natural heritage or the mighty Tiger since we do not see it, sense it or live it.


They need to regulate tourism and not ban it, it is due to tourism that we have visited tiger reserves and seen a tiger with the consequence of falling in love with the big cat and other denizens of forest. Or, it has been a photographer who visited one of these tiger reserves and clicked a photograph which made us fall in love with this majestic animal. If tourism is banned it will be the worst decision possible.


Note: A very important question is what is the number of Tigers in the tourism area of core zone and in non tourism zone? As per my knowledge most tigers in Kanha and Bandhavgarh are in the tourism zone.
Posted by Navneet 'NaMah' at 4:48 PM 4 comments:

﻿
Wild Dogs or Dholes are known as The whistling hunters as they do not bark but communicate between each other by whistling. They live in packs of 3 to 25 and packs of 6 to 14 are common. ﻿ 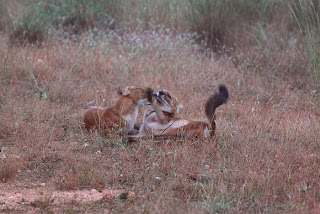 Wild dogs are perfect predators and seeing them making a kill is an experience in its own. Once I saw a pack making a kill and they did not even wait for the poor spotted deer to die but started eating its intestines. 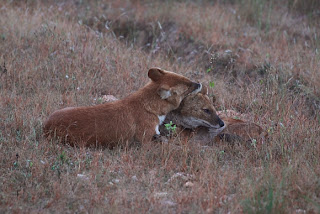 We saw this pack of 7 wild dogs at Kanha national park. It was early morning when we were looking for Tiger since we had heard chittals i.e. spotted deer calling. We saw some movement around 40 feet from us where it was very dense foliage. And it was here that we saw this pack coming out. They sat near our Gypsy and were playing together. This went on for almost 40 minutes and than they left inside again. 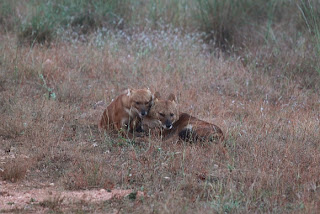