So known for its bark like alarm call, Barking Deer or Indian Muntjac (Muntiacus muntjak), is short brownish deer species with tusk like upper canine teeth’s. Its alarm calls are a very reliable indicator of presence of any predator. Indian Muntjac is most wide spread of total 11 species of Muntjacs found in Asia.


Barking Deer are very distinctive with their tusk like canine teeth which is used to defend itself. It has wide coloration range with Dark brown to yellowish or grey brown on dorsal, white on ventral side and slightly darker brown face. They have very short antlers of around 2 to 3 inches. They are around 20 – 25 inches tall and 40 – 55 inches long with male of the species bit taller than the females. Their weight ranges between 20 – 30 Kgs. Male Barking Deer have their separate territory and can be very aggressive against intrusion. They have a life span of 25 to 30 years.


The Barking Deer can be seen in tropical and subtropical deciduous forests, grasslands, savannas, and scrub forests from sea level up to an altitude of 9600 feet in Himalayas. It is found in India, Sri Lanka, Bangladesh, China, Nepal, Pakistan, Cambodia, Vietnam, the Malay Peninsula, Sumatra, etc. It is most densely located in Southeast Asia with Indian population estimated to be more than 1,30,000. Scrub forests and hilly tracts around forests and national park like Kanha, Corbett and Bandhavgarh are  good places to observe them where they can be spotted feeding at the edge of the forest or in abandoned clearings. 
Indian Muntjac prefers hilly areas with water in the vicinity. Omnivores in food habits they eat  grasses, prickly bushes, leaves, bark, twigs, fruit, seeds, tender shoots, eggs and small warm-blooded animals. They have also been seen eating on dead animals at times. Normally seen alone they have also been seen in groups of 3 – 5. A very cautious and shy animal which can be seen by the way it moves, one step at a time, ready to run away with slight hint of danger. Author has seen one Barking deer approaching almost 10 – 12 feet of where he was sitting motionless until his presence was given away by cloth movement due to sudden wind.

They prefer dense forest area to open grass land and can often be spotted on the fringe forests. Males mark their territory and defend it from other male which often leads to fighting.  They leave scent markers by rubbing their pre-orbital glands (located just below the eyes) on the ground and on trees and scraping the bark of trees with their lower incisors. I have often seen them visiting water holes in the evening for a quich sip.


Indian Muntjac does not have any specific breeding period. Female gives birth to a single fawn after a gestation period of 6 – 7 months. They chose a dense patch of forest for safety from predators. Young leaves the mother in 5 to 6 months to make its own territory. 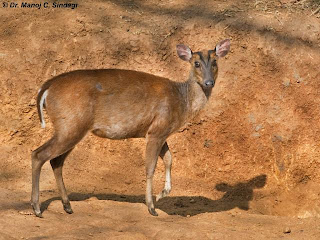 
Habitat destruction and poaching for its meat and hide are major problem behind its decline in population. Barking deer is killed by farmers when it raids the agriculture fields adjoining dense forest.


Although barking deer is not in the endangered species list but in India its hunting is barred by law.