The Jungle cat (Felis chaus) is a close relative of domestic cat. Although wide spread and common at most of its distribution range it is difficult to see due to its camouflage and habit. With pale grey brown to tawny brown fur, dark rings on tail and distinctive tufts on ears it can be differentiated with domestic and other cat species. It was thought to be a member of Lynx family earlier and at times even called Jungle Lynx.
Characteristics
With slender face, tuft on the ears, short tail and long legs Jungle cat is largest species of Felis genus. Fur colour varies as per region and sub species from yellowish grey, reddish brown, pale grey brown or tawny brown with black spots and visible black bars on tail and legs. Somewhat larger than domestic cats standing around 37 to 50 inches long (including tails) and 14 inches tall they weigh around 8 – 10 Kgs. Females are slightly shorter than males. Its tufted ears are long and pointed towards the end set fairly high on the head.


The jungle cat, can be found in variety of environment but prefers habitat with dense vegetative cover, especially reed swamps, marshes, grass lands and oasis in deserts with availability of water being an important factor. They have been observed to have adapted well to irrigated cultivation throughout their range and can be seen in jungles or open country in the neighborhood of villages. They can be found from sea level to an altitude of 8000 ft in Himalayas. 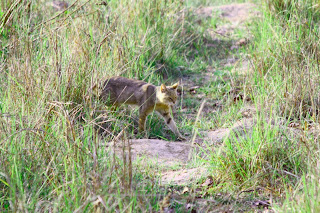 Ecology, behavior and Food
The Jungle Cat is a carnivore and preys on small animals mainly hares, ground birds, snakes, lizards, squirrels, frogs, etc. Although mainly nocturnal they hunt during both day and night and in winters mostly in early morning as well as late afternoon. They maintain their territory by urine spraying and scent marking and hunt by ambushing and stalking their prey from behind tall grass cover or reeds and catching them with a final pounce. Most of its preys are small in size say less than a kilo in weight but it has been seen killing chital fawns, young of other animals, water birds and scavenge on other animals kills at times. Solitary in nature they use abandoned burrows, tree holes, and coves or dense vegetation to rest and can be seen sun bathing in winters.


Their most common predators include crocodiles, bears, wolves, Jackals, and other larger felines such as tigers and leopards. When countered by a threat, the jungle cat will produce small roars before attacking. They have been seen jumping on attacker trying to catch from the larynx if threatened. There have been known cases of jungle cats attacking probing humans near their kittens. They can swim well and walk up to 3 Km’s at a stretch. They have been known to live for 16 – 20 years in the wild.


Reproduction
Females give birth to litters of three to five kittens, usually only three and have been seen raising two litters in a year although rarely. Gestation lasts 63–66 days; birth generally takes place between December and April, depending on the local climate. Kittens are weaned generally after 100 days.  Before birth, the mother prepares a den in an abandoned burrow, hollow tree, or grass / reed bed. Although Jungle Cats do not give birth to young once around human habitation but the author noted in December 2012 that it had given birth to kittens at KanhaVillage Eco Resort, Kanha National Park which shows that if local habitat is left undisturbed and it feels safe Jungle cats do not hesitate to use inhabited places.


Kittens weigh 80 to 160 grams at birth, initially blind and helpless. They open their eyes at ten to thirteen days of age. Raising the kittens is female’s job but males have been seen to be very protective of their offspring. Kittens start catching their own prey at roughly six months, and leave the mother after a couple of months.
Threats
Some populations of jungle cat subspecies are declining in several countries and areas due to decline in habitat and poaching.


Conservation
Jungle Cat - Felis chaus is listed on CITES Appendix II and its hunting is prohibited in Bangladesh, China, India, Israel, Myanmar, Pakistan, Tajikistan, Thailand, and Turkey but it does not get enough protection.


Where to see:
In India Kanha National Park is one of the best places to see this beautiful animal along with Ranthambhore, Pench, Sariska, Panna, etc.