Native of South Asia – Gaur (Bos gaurus) is the largest of Bovine (Cattle) family in the world. It is also called as Indian bison although it is not a bison. Three subspecies of Gaur have been recognized, one found in India, Nepal, and Bhutan is known as - Bos gaurus gaurus. The domesticated form of gaur is called gayal / mithun (Bos frontalis).

Characteristics
One of the largest living land animals – Gaur is a strong and massive animal with a prominent ridge on the back. The adult male gaur is dark brown to almost black in colour; the lower parts of the legs are pure white or tan giving impression as if the animal is wearing socks. The cows and young once are paler in colour. The hair is short and glossy, and the hooves are narrow and pointed. With body length between 8 to 10 feet and tail of 2 to 3 feet they can weigh anywhere between 600 to 1000 Kg. Large male bulls can sometimes weigh up to 1500 Kg’s.  Females are bit shorter and less bulky than male counterparts; both carry pale green to yellow coloured horns with black tip, which grow from the sides of the head, curving upwards and grow to a length of 24 to 40 in.


Distribution and habitat
Range: Although fragmented within its range once Gaur occurred all over mainland South and Southeast Asia, including Vietnam, Cambodia, Laos, China, Thailand, Peninsular Malaysia, Myanmar, Bangladesh, Bhutan, Nepal, and India. Today except India their population has decimated to such an extent that its reversal does not look viable. Most gaur populated national parks are in southern India but seeing them here is difficult due to dense forest tracts. In Central Indian national parks like Kanha, Pench, etc. they can be seen relatively easily.


Gaur can be seen from sea level up to an altitude of 6000 feet in evergreen, semi-evergreen and moist deciduous forests. It prefers undisturbed forest tracts, with availability of water and plenty of forage in the form of grasses, bamboo, shrubs, and trees.


Ecology, Behavior and Food
Basically diurnal animals they can be seen in undisturbed forest patches like Kanha national park at any time of the day. In monsoon they climb hilly areas but with onset of summers and lack of water in higher ground they descend to lower regions and open grass lands with good water bodies. They live in herds of 10 to 50 which comprises of females and young ones led by one old adult patriarch female. Adult males are mostly solitary and join a group only at the time of mating. Although not very vocal Gaur have been known to snort, make a low, cow-like moo or whistle for help. Solitary bulls are very aggressive but in general they are very shy and when alarmed, run into the dense undergrowth at an unexpected speed.


Occasionally tiger and crocodiles have been reported to kill fully grown adult but due to their formidable size and power most animals prefer to keep a distance. Tiger, Leopards and wild dogs kill unguarded calves or young ones at times. When confronted by a predator, the adults of a herd form a defensive circle around vulnerable young calves to save them. Author has seen at Kanha, Dholes killing a young gaur making inroad into the defense circle made by adults.


Gaurs consume herbs, young shoots, flowers, fruits, grass, stems and seeds of many varieties. They have been seen consuming tree bark at times and prefer fresh grass when available to maintain the mineral and nutrition levels. 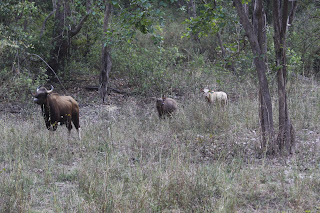 Reproduction
Males make a mating call of clear, echoing tones which may be heard at long distances. Mating peaks between February to June although they have been seen breeding almost whole year round. Female Gaur gives birth to one calf after a gestation period of about 260 – 270 days; calves are weaned after 10 to 12 months.


Threats
Gaurs are highly threatened by poaching for commercial trade in meat and trophies. Fragmentation of forests and loss of habitat for commercial use and agriculture is also taking its toll on their population. Where ever the wild population is coming in touch with cattle chances of disease like rinderpest decimating the most of the population has been recorded.


Conservation
Gaur is listed as vulnerable on the IUCN Red List due to the population decline in the species range. Listed in CITES Appendix I, Gaur is legally protected in whole of its range. They are protected in most national parks in India and can be seen in Kanha National Park and other central Indian reserves very comfortably.

Author: Navneet Maheshwari is a wildlife lover by heart, hotlier by business and wildlife photographer by hobby. He owns Kanha Village Eco Resort at Kanha.
Posted by Navneet 'NaMah' at 3:26 PM